The Orquesta Sinfónica y Coro RTVE is a symphonic-choral orchestra dedicated to the performance and dissemination of quality musical culture, within the framework of the RTVE Corporation.

In 2015, the Symphonic Orchestra celebrated its 50th anniversary. To the latter are added the 65 years of the brilliant artistic career of the Coro RTVE. Both, Orchestra and Choir, integrate a symphonic-choral structure involving an ambassador of cultural excellence with vocation of public service. It is the only symphonic-choral institution in Spain which fulfils an intrinsic audio-visual function, since almost everything performed is broadcasted through TVE, RNE and RTVE.es, at the same time it develops an intense activity in the recording of radio and television stations as well as soundtracks of TVE series and films. It also contributes to the RNE documental background with records of great artistic and historic interest, reference sonorous gems.

The presence of the Orquesta Sinfónica RTVE is regular in the main Spanish festivals, like the Festival Internacional de Música y Danza de Granada, Festival Internacional de Santander, Festival de Música y Danza Ciudad de Úbeda or the Semana de Música Religiosa de Cuenca, where the Orquesta Sinfónica y Coro RTVE was awarded in 2017 with the honorary prize for the defence and dissemination of sacred music. Its international dimension is forged by means of the exchanges with the EBU (European Broadcasting Union) and their performances abroad. In June 2018 it offered a concert in Portugal (Belem Auditorium, Lisbon) together with the Metropolitan Orchestra of Lisbon. 2018 will be the seventh time that the Orquesta Sinfónica RTVE collaborates with the Concurso Internacional de Piano de Santander ‘Paloma O’Shea’ in the final concerts of the competition.

The Coro RTVE is the oldest professional choir of Spain and is considered as one of the best choral groups in Spain. Its repertoire includes from the first sacred and secular works until contemporary works of national and international composers, including many releases.

Apart from its performances with the Orquesta Sinfónica RTVE and its many concerts both a capella and with other instrumental ensembles, it has participated in outstanding international festivals. It has also collaborated in multiple campaigns and commemorative events, having been invited by the most important Spanish orchestras like the ONE, the Sinfónica de Madrid, the ROSS, the OBC, the Hallé Orchestra. Among its awards, worthy of mention is the ‘Premio Día Internacional para la Eliminación de la Violencia contra la Mujer’ 2014 (Prize for the International Day of Elimination of Violence against Women) granted by the Ministry of Health, Social Services and Equality, The Coro RTVE has been awarded with the ‘Premio ¡Bravo!’ 2016 in the category of music, granted by the Conferencia Episcopal Española.

In the international field, worthy of mention is its participation in the festivals of Flanders and St. Petersburg, besides its tours in Rome and The Vatican in 2016 and 2017, due to the collaboration agreement with the Coro Filarmónico-Vaticano. In June 2018, it performed in the Bridgewater Hall of Manchester (United Kingdom) together with the BBC Philharmonic Orchestra, with which it tackled an international discographic project: La vida breve, by Falla, under the baton of Juanjo Mena.

Today, the Orquesta Sinfónica y Coro RTVE celebrates more than 85 concerts every year, between those of the main concert season and the many extraordinary and educational concerts.

The Orquesta Sinfónica y Coro RTVE begins this 2018-19 season in October with 20 main programmes and a number of extraordinary concerts, as well as the XIX Ciclo de Jóvenes Músicos, the XVII Ciclo Coral and the Los Conciertos de Radio Clásica that reach their 23rd edition in the promotion of chamber music.

The Auditorio Nacional de Música, the Auditorio de San Lorenzo de El Escorial and the Teatro Monumental de Madrid are the main venues in this season, the third with maestro Miguel Ángel Gómez-Martínez as principal conductor. Great symphonic-choral works and operas in concert version play the main role of the programme with Alpine Symphony by Strauss, Symphony ‘Resurrection’ by Mahler, the ‘Renana’ by Schumann, the Seventh Symphony by Dvorak or the Ninth Symphonies by Schubert and Bruckner, among the most famous pages of symphonic literature.

The Coro RTVE recreates great works like The Childhood of Christ by Berlioz; the Te Deums by Bruckner and Berlioz; the Misa Solemnis by Mozart; King David by Honneger; The Hymn of Jesus by Holst and The music makers by Elgar. Among the concert works for the soloists to stand out worthy of mention are Concert for clarinet by Mozart; the Concerto for piano no. 3 by Rachmaninov; the Piano concerto no. 2 by Brahms; the Concerto for violoncello by Laló; the Violin concerto no. 1 by Bruch or the Violin concerto ‘To the memory of an angel’ by Alban Berg. The season begins with the concert version of the opera Fidelio by Beethoven and ends with La Rondine by Puccini.

In its commitment with contemporary music, world premieres are included like Whispers in the Dark by Juan Durán, winner of the XXXV Premio Reina Sofía de Composición Musical; Concerto for trumpet and trombone by Christian Lindberg, performed by Pacho Flores and Ximo Vicedo; Kaleidoskopio, a work by Saúl Gómez Soler dedicated to the percussionist José Luis González; and the Overture that the famous composer Federico Jusid dedicated to the Orquesta Sinfónica RTVE.

Moreover, the house talent is also taken into account with the collaboration as soloists of Mariana Todorova (violin), Ximo Vicedo (trombone), Javier Martínez (clarinet) and José Luis González (percussion), together with the relevant soloist voices of the Coro RTVE. 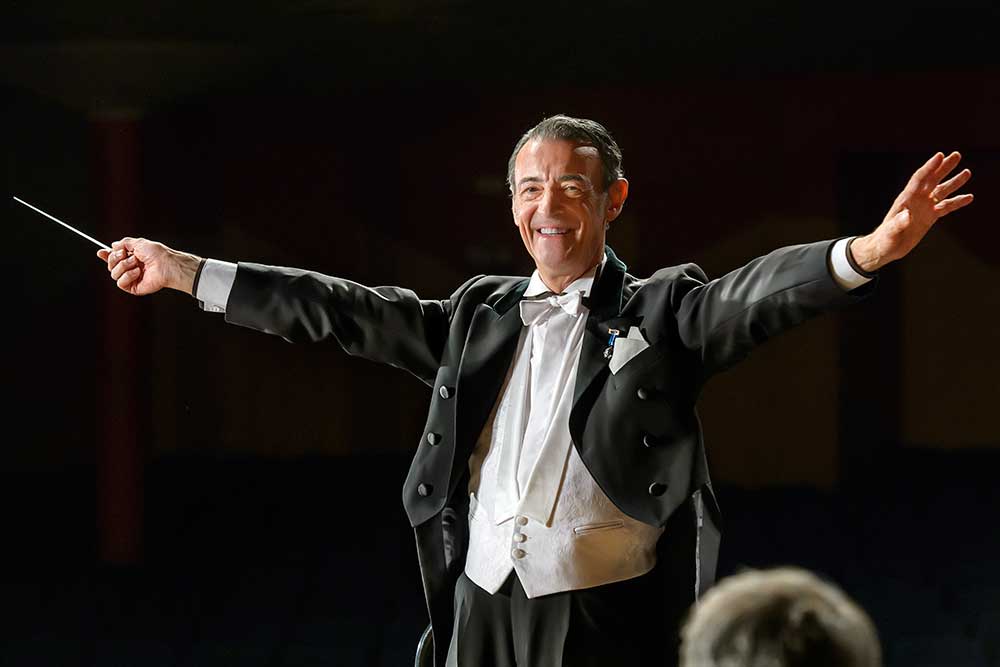 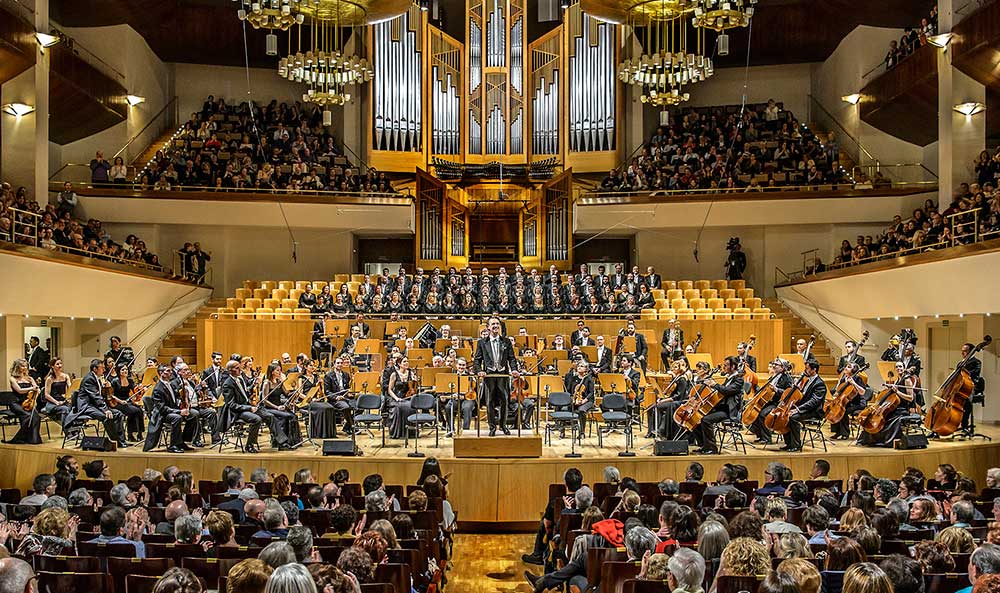